Our Eternal Journey of Becoming 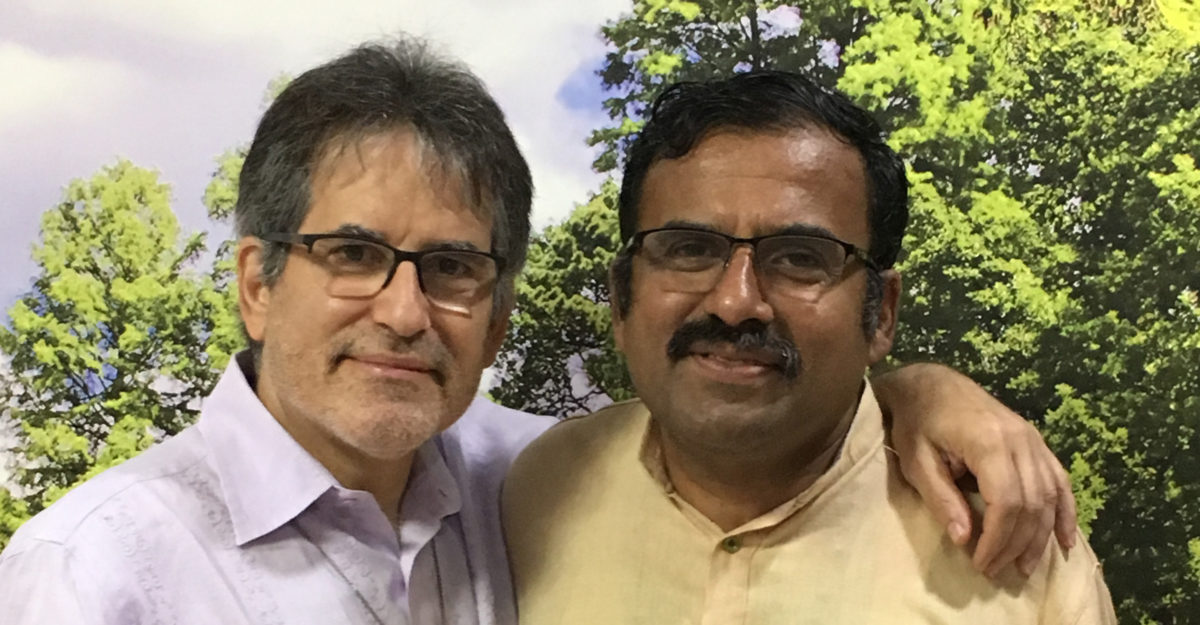 I recently returned from India where I was leading a five day retreat in Bangalore. While there I had a beautiful and profound meeting with another spiritual teacher named Prabu or Prabuji as he is affectionately called by his students.

Prabuji’s transmission is a very modern expression of India’s ancient wisdom. Before he retired and became a full time teacher he had been a successful software designer and had run his own company. He had studied yoga and Vedanta for many years, and after spending time with many of India’s most powerful and prominent gurus, he gradually found himself compelled to sit for hours on end in quiet meditation.

As he explained it to me, he wasn’t meditating, he was being meditated. As this metaphysical depth consumed his entire being, he was called to share a dawning realization. Miraculous events began to unfold around him, and also within those who found themselves drawn to him.

Prabuji has an encyclopaedic knowledge of Vedanta and can give a detailed and complex lecture on almost any aspect of this perennial tradition. He can do so without any hesitation or need for preparation, and remarkably some of his closest students can do the same.

A young artist who is very devoted to him described how, after sitting for some months with Prabuji, he was asked to give a lecture on one of India’s most revered spiritual texts, the Bhagavad Gita.

The Bhagavad Gita is considered to be the Bible for all true and aspiring Yogis and Yoginis. Even though this young artist had neither read nor studied the Gita before, Prabuji assured him that he need not be concerned. Despite his protestations, to his amazement, when confronted with a waiting audience he found he had effortless access to the profound knowledge of one of India’s most sacred texts. Not only did he have access to the Gita’s content, but he was able to spontaneously give detailed commentary as well.

This artist used to be a singer in a heavy metal rock band. He had sought out Prabuji in anger, because a friend of his had given up drinking alcohol after coming into contact with the teacher. He soon found himself overwhelmed by the fierce logic of the Vedanta that was streaming through Prabuji, and before long he found himself at the modern guru’s feet, hanging on his every word. His life in Bangalore’s hard rock underworld was now gone forever.

I was truly struck by the level of spiritual self-confidence in many of Prabuji’s students. Another young woman I met there had also been graced with the miraculous ability to teach way beyond her own level of acquired knowledge. When I asked her how much spiritual practice she did she said “none”.

In Advaita Vedanta, the most radical form of Vedanta, consciousness alone is real. The world of time and space is an illusion, merely a temporary appearance. It is said that when one has fully realized this truth about the primordial nature of consciousness, one has reached the yonder shore of enlightened awareness, and is effortlessly resting in BEING.

I honestly can’t say after such a short meeting how deeply enlightened Prabuji’s young followers were, but their confidence was impressive and they all seemed to be humble, gracious, open and honest people.

On this, our second meeting, Prabuji had invited me and my wife for dinner with his family and close disciples. Before, during and after dinner, we talked non-stop about Vedanta.

At a certain point the subject of Prarabdha Karma came up. Prarabdha Karma is the accumulated momentum of  both positive and negative conditioned impulses, memories, impressions, latent talents and traumas that we bring with us from past lives into this present life.

During this discussion my mind spontaneously and dramatically opened to a mysterious dimension that exists beyond time. Prabuji is so seamlessly grounded in this metaphysical depth that speaking about Prarabdha Karma in the reflection of his awakened awareness seemed to catalyze a moment of profoundly expanded consciousness.

I became aware of a line reaching way back into the infinite past and forward into the infinite future at the same time. In it I could see directly the reality of the continuity that is karma, death, and rebirth. I could see the gradual step-by-step evolution of the soul over many, many lifetimes.

Until this moment I had intellectually accepted the truth of this life-to-life continuity, but mainly as a belief. Now I was experiencing a knowing that seemed to come from direct seeing.

In that moment, specifically in relationship to the incredibly rare attainment of enlightened awareness, I saw directly how many experiential glimpses it would take over many lifetimes to become stabilized in that subtlest of subtle cognitions.

The attainment of enlightened awareness is the direct knowing that the ultimate nature of all form is an emptiness, a voidness that is ungraspable by the mind or intellect. The knowing of that ultimacy requires a freedom of mind that is rare, and a deep trust of that which the mind can never see. In that moment of awakened awareness I saw how inconceivably long it would take to be able to develop such a capacity.

This helped me to understand why so many seekers are able to have seemingly deep awakenings to the ultimate truth, but so few seem able to sustain that awakening for more than a few moments. In that instant I felt for the first time how very, very long I had been on this journey of awakening.

Seeing all this was truly breathtaking. The only other time I had experienced such a penetrating gaze into the illusion of the solidity of the present moment was in the presence of my own guru H.W.L. Poonja. On this same subject, Poonjaji once told me the most truly unbelievable story I have ever heard about his experience of his own karmic history and previous births.

At a certain point it dawned on him that all these forms were none other than his own self in the midst of the process of incarnation in the ancient past. As this process continued to unfold he said it included seeing the cycle of birth and death of his own soul leap from one planet to another, and in this continuity the forms in which his soul incarnated continued to evolve until he found himself on planet earth. He saw the process as if it were a timelapse movie, getting faster and faster until he arrived in his current life when the stream of forms and places came to an abrupt halt with the face of his own Guru, the renowned Ramana Maharshi.

On the last day of our retreat in Bangalore an English woman came up to me and told me she had had a powerful vision during one of our long meditation sessions. She said that in the silence she had been looking at my face when suddenly she saw many different faces appear, one after another, in timelapse. She saw the faces of men and women, young and old, all of them flickering glimpses of my previous incarnations.

It’s often hard to believe that we have been on this journey of evolutionary becoming for such an unimaginable stretch of time. But in our deepest moments, when the mind has become quiet, it does indeed seem that we have.